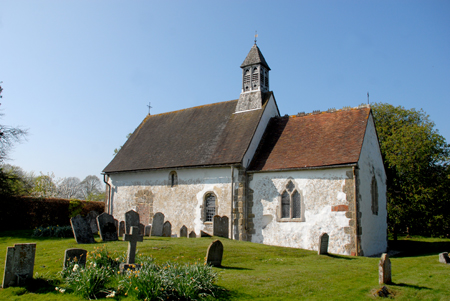 A Saxo-Norman church, Hardham lies on the previous Roman Road Stane Street now called the A29 and is internationally famous for its exceptional wall paintings considered to be pretty much contemporary with the building of the church. A restoration in 1866 uncovered the paintings from the 'Lewes Group' of twelth century wall painters – the full extent was realised in 1900. Some brick rubble in the walls may come from Roman buildings from the nearby Roman station.

The position is near to where the Greensand Way, another Roman Road, crosses the River Arun by a causeway.

The layout remains simple, as does that of many of the South Downs churches. There was once an anchorite who was given his own squint to see the altar.

The church glows white in the sun from the external whitewash – which makes it difficult to photograph!