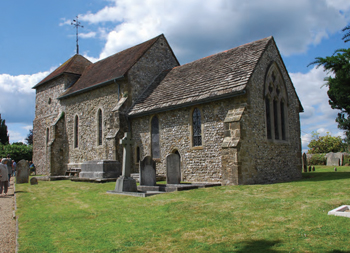 This beautiful church with Saxon origins is dedicated to St Mary, which is a very popular dedication that tops the ‘league table’ for Church of England dedications.

Every other year the church at Sullington is enhanced even further by a flower festival where multiple flower arrangers interpret a theme. In 2014 when we visited the festival the theme was ‘on a wing and a prayer’ with 21 displays both within and outside the church. The church nestles below the downland scarp in the middle of a working farm, with a splendid tithe barn that has had a 21st century restoration to its former glory.

On one visit that we made a Society for the Protection of Ancient Buildings team were carrying out an array of specialist repairs to the walls of the church and the churchyard and it was inspiring to watch their work and see the materials that they were using.

The church stands up on a bluff above the lane. A massive yew is all that remains of the six that used to populate the churchyard, three went 200 years ago, with another two taken by the 1987 storm.