The pond and church at Falmer, Sussex 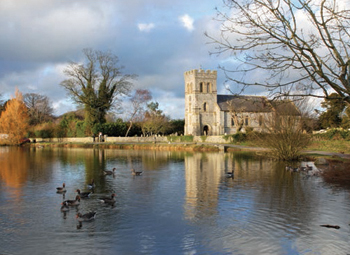 This Victorian church is dedicated to St Laurence, known for his care for the church and alms for the poor. He was patron saint of archivists and librarians.

If you travel the A27 on its booming path between the universities of Sussex and Brighton it seems impossible that there could be any peace anywhere near. But in fact the church sitting next to a farm by the village pond is in an idyllic setting and although the village is bisected by the road that runs in a cutting below, connected by a metal footbridge, the area by the church still retains the sense of an ancient setting. Falmer church is a strange creation of brief early Victorian fashion. There has been some confusion about the dates of the rebuild and also the scale, cleared up to a degree by the existence of drawings, from before the later suggested date. Basically the church at Falmer is the result of Neo-Norman rebuild in 1840 on a Domesday era site. It is also not as large as at first it appears.

The farm has a long low barn that looks like a tithe barn, but as it is probably sixteenth century the date is wrong.