It's Warmer Down Below: 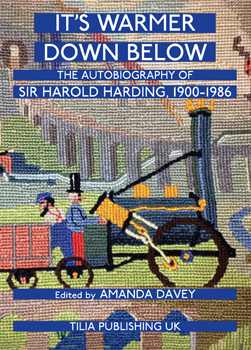 This highly engaging autobiography was written by Sir Harold Harding (HJBH), founding Chairman of the British Tunnelling Society, past President of the Institution of Civil Engineers and high profile civil engineer.

It includes descriptions of significant changes in civil engineering techniques and rationale, many of which were initiated by him in his time as a contracting engineer/director of Mowlem and later through his consultancy and arbitration as an independent trouble-shooter. Many of the stories are hair-raising, many are situationally funny and a great deal of the history of twentieth-century engineering is enlightened by the presence of the man on the job.

The projects covered are some of the key milestones in UK and world engineering, and include:

HJBH was a man of huge vision and practical comprehension, with a character that is now very rare in people who reach the top of their profession. He knew what he couldn’t do without help from others and made certain that these others were exceptional in their work and knew how valued they were. The book is written in his characteristic style of wit and pithy observations, with two extra chapters added at the end to complete the story by his grand-daughter, Amanda Davey. As well as the civil engineering history included in the book, it also serves as a guidebook to networking effectively and is also likely to provide many attention-grabbing stories for use in after-dinner speeches.

NOTE: An eBook is also available on Amazon Kindle, priced £9.99: It's Warmer Down Below

In June 2021 we ran a series of Facebook Live book readings we called Wine and a Book. We were a bit 'lockdown phased' but the readings were real readings!

The reading by Amanda Davey from It's Warmer Down Below is here:

The [auto]biography is exhaustive in detail and extensive in wisdom...this is a very worthwhile read ...and there is something for all in this impressive history of one of the industry greats.
Paul Perry, Tunnels and Tunnelling

While well-known in the tunnelling and civil engineering fraternity, Harding probably doesn’t get the credit he deserves for shaping early geotechnical practice in the UK. As well as his hands-on experience with grouting and dewatering, he was a founder director of Soil Mechanics Ltd (probably the world’s first geotechnical specialist firm) and he was mentor to Hugh Golder, another influential figure....this [autobiography] has some fascinating stuff in it...the technical details are interesting but the personal side gives an insight to the time, such as Harding’s unease when visiting Germany to be trained in grouting and dewatering during the period of the rise of the Nazis in the late 1930s.
Martin Preene, blog post on Ground Engineering website

This book is so good that I know exactly where it is on the bookshelf!
G., Sussex

I have enjoyed this book so much that I have read it three times. I particularly like the sense of humour, as on p.38 [see extract below]
D., Brighton

When he saw your book he [got very excited].  He started reading it but did not finish of course, so dense with info, so that he asked to borrow it for  their flight back to London...we keep in touch and he cannot return book to me [as yet]
B., South Africa

Every civil engineer, however academically endowed, has to start his practical career in a state of ignorance and then gradually accumulate experience. The lessons learned from the past are not always out of date so an intelligent interest in the antics of his predecessors can speed up the process.
HJBH quoted by Martin Preene

The vital process of gaining experience can be indirect as well as direct and varied by observing the misfortunes of other people. The gas explosion in Holborn High Street in 1929 is one example as it took place only a few hundred yards from our office. Lack of oxygen is the risk to be met in such closed tunnels and the GPO very wisely gave their maintenance men electric blowers to freshen the air before patrolling the tube, but the socket into which the blower had to be plugged was placed at the bottom of a small manhole. On this winter morning, the first man descended to plug in the blower but it was too dark to see the plug, so he lit a match! That was the end of him, several others and the pipe. The tube split along the whole length, from the then Princes Theatre in High Holborn, around St Giles to a short distance from Tottenham Court Road Station. A long crevasse was formed for the whole distance, several fires were started, gas and water mains burst and manhole covers were thrown over nearby roofs. Several walking wounded were cared for. It seemed a mystery how gas could have accumulated in pipes which had originally depended on their air-tightness for their function, but joints may have rotted away near a leaking main. According to the newspaper, the gas company fought hard to prove that it was marsh gas and not town gas, but apparently without much success. The experience of seeing such damage and the efforts of the various services, who coped with it so well, was a useful preparation for future work in the Blitz.

In January 1929 another incident, which was none of our making, had a strong influence on my next assignment. John Mowlem’s building department had just earned many laurels for completing the first of the two new headquarters for Lloyds, to which the famous Lutine Bell was transferred. The design by the architect Sir Edwin Cooper was in his best Classical tradition, in the highest standard of craftsmanship, with much carved detail and swags of wooden fruit. The same team were all set to start on a new headquarters for the National Provincial Bank opposite the Mansion House when events fundamentally changed the methods to be used.

These events were caused by problems incurred a few months previously, when another building contractor was making a deep excavation alongside the Commercial Union Building in Cornhill, opposite the Royal Exchange. In it was to be built a Midland Bank. This hole was being done in the old style to a considerable depth, but the sides below the Commercial Union footings and along the edge of Cornhill were supported by long raking shores that held up vertical timber ‘soldiers’ which held all the frames of timber. After heavy rain, the feet of the raking shores slipped and the old masonry Commercial Union Building cracked all over and the staff had to be evacuated. A day or two later, watched by crowds of excited spectators, the building collapsed onto the raking shores which supported Cornhill. The effect was most educational - Cornhill roadway began to fall into the hole, gas mains broke and caught fire, water mains burst, hydraulic mains, with their 600lbs/square inch pressure made their presence felt and a good time was had by all.