Blue Tits - a bit of history 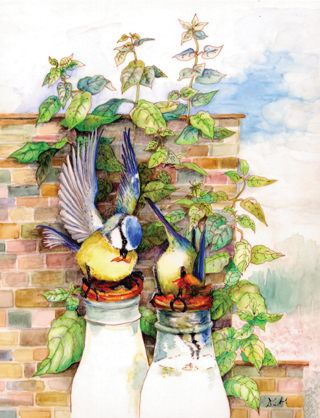 This card, painted by Diana Harding (my mother), absolutely sums up the passing of time and the odd things that we blink and miss. As a child the milk always came in from its delivery with just a little bit missing from the top. The foil was pulled back and the Blue Tits had lapped up what they could, until my father constructed a milk bottle holder from a bit of drainpipe. So long as the right milkman delivered my parents got their milk without thievery.

It was in the 1970s and 1980s that this boom of learned habit in blue tits (in particular) was at its peak. It became a bit of a battle between human and bird to get to the milk first. In those days the bottles were Gold Top, Silver Top and I seem to remember Blue Top with silver stripes. This was for full cream, standard and some sort of skimmed. The preferred bottle for the Blue Tit was the Gold Top, with the Silver Top being worth a peck. Anyone who had the Blue Tops delivered tended not to have the problem once the birds twigged there was no cream.

My mother always found this fascinating and sort of endearing.

Nowadays there aren't many milk deliveries, there certainly aren't many gold topped bottles and the habit has pretty-much stopped. It is fascinating to watch the faces of people as they see this card, as whole generations have never seen Blue Tits do this!