Last year, one of the first magazines on my list to approach for a review of Freckles and Friends was New Nature, a fresh online magazine aimed at young people, who I had been following on Twitter for some time. The lovely Emma responded with an enthusiastic yes please and said that she would ask around to see who she could line up to do the review. 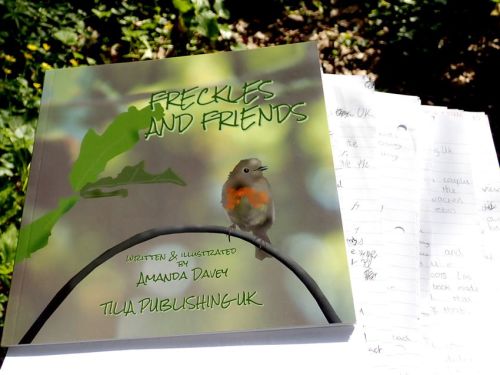 Not long afterwards came the news that she had arranged for a review to be done by Year 8 of Calderstones School, in Liverpool! Their teacher comes across as just the right sort of teacher to have, positive and engaged with the world around her. I looked forward to the answers with a mix of excitement and anxiety. It was so exciting to have a class of schoolchildren go through the book. But what would they say?

The tweeted glimpses of their work looked positive and I awaited the promised piece. By October came the fact that Emma was no longer working on the magazine, but Alice made contact with the school and promised that a blog would be forthcoming.

When there was still no news, I made contact with the teacher in February this year and she promised to send me the scripts so that I could write them up.

So. I wrote the book and I am going through the reviews. Authors rarely get the chance to respond to feedback, it is certainly not a good idea to go on the defensive. What has struck both of us (Simon and me) is how consistent these kids were in their reaction to the book. For this reason I have decided to quote from each of their pieces where they had something individual to say about the book. I will then summarise their niggles and the grading that they gave. At the time they were thirteen years old. To have taken the trouble to write their reviews is a mark of their characters, as the book was really written for younger children, a fact that they all pointed out with relish.

Almost all of the 26 of them came up with insightful positive comments. At the launch of a new bookshop the other day we met some authors of Young Adult fiction and talked about this experience. Young Adult fiction is some of the most difficult to write as the audience is particularly unforgiving. For this reason the fact that the concerns were all very similar but the positive responses varied widely, it feels justified in taking this approach.

One of the reviews began with a list of tasks that they had been asked to undertake as part of the process, so it is possible to be very clear about how they then laid the reviews out:

"In the book, Freckles was my favourite character, he was cute and harmless and he sang beautifully. My favourite part was when Amanda first met young Freckles as he flew down to the table and started to peck away at the crumbs. The book made me laugh at first when the squirrel Atlas always found a way to get to the food".

"Although the book was written for an age younger than mine, I still enjoyed reading stories about wildlife and found the description detailed and easy to understand. I can see why this book would appeal to children aged 7-10 as the description creates good imagery and is clear and simple".

"I like the way the book makes you [feel]. It is quite calm and relaxing but still has an underlying story. Freckles and Friends is a light-hearted book that teaches some valuable lessons to kids of ages 5 to around 7 or 8 about how to treat wildlife and may spark an interest for some, for example, squirrels in the book are portrayed as naughty, children could look out for particularly naughty squirrels in their back garden". 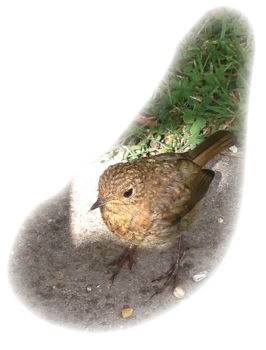 "I liked the nature theme of this book, especially as these short stories were true. This book is also very clever as it has elements of fiction and non fiction throughout the book, which creates good stories. The concept of someone watching their garden over a few months is very interesting. I also liked the fact that the book went from summer to winter and followed the life and journey of Freckles the robin, I found that it was a very creative, inventive idea that would fascinate many readers".

"The book ‘Freckles and Friends’ was a lovely easy-read heartfelt book that made me chuckle although it would be suited to a younger audience".

"I like the way the animals are each thought out independently and the slow progression of the year as it related to the animals. I believe this book will help children with new knowledge of creatures".

"This book is simple, there is no doubt about that, but it allows kids to learn about nature without them realising it. The information is subtly snuck into the story quite cleverly. As a thirteen-year-old this book is definitely lacking in a lot of things like an interesting plot, but it is clear that this book wasn’t made for someone of my age range".

"One thing I found interesting about this book was that everything was real, I could imagine a growing child reading this, as some kids like nature and would like to learn about nature".

"I particularly liked the second chapter where we are introduced to the main character". 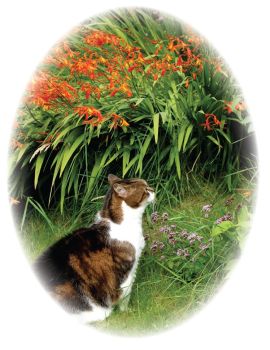 "My favourite character was Atlas the squirrel, because of his naughty and clever personality. I have two favourite parts of the story, when Freckles got murdered by the cat [although he didn’t] and at the end, at winter when all the animals were hibernating and the mice were just running around looking for food and praying that they aren’t prey themselves".

"I like how you see all the wildlife in its natural habitat and what it would act like in the situation. I love how the seasons change, it sets the story and it makes it come alive and helps you to imagine how Amanda and Simon are feeling at the time and what they are doing".

"The book was interesting as that kept you wondering as to what the different characters were doing, whether that was Atlas, Porgie or Freckles".

"Although the book is all true stories, it also includes the author’s imagination to make it less like a book strictly of facts and more adventurous and interesting for those of a younger age. I think that the use of simplistic language and repetitions are good features because it helps small children to understand".

"One thing I liked about this book was that the animals are all real and described very realistically. I also liked the way that the story is set in a place that will be familiar to most people living in the UK". 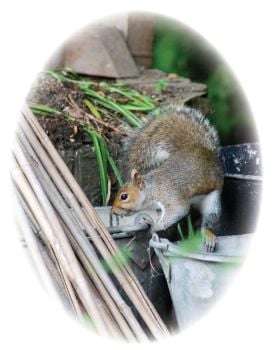 "Personally my favourite character was Atlas the squirrel as he was mischievous which added the element of amusement. The characters did feel real to me, especially as this is a true story".

"I like how the story is portrayed through the eyes of people watching their garden grow over time. With a few changes I think this book could be quite good and enjoyable".

"The creativeness of this book will encourage younger children to take more of an interest in the outdoor wildlife. This book offers alot of information about wildlife. It keeps the reader asking questions about what will happen to the creatures next season".

"I can see how this may be appealing to those who are more interested in nature and the subjects that surround it, but it doesn’t really interest me". 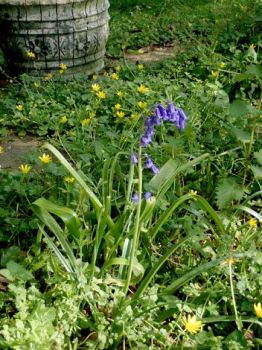 "The whole outdoors garden theme is good as it will make the reader want to get outdoors (no matter what age). Including animals in the book made me feel more interested in it and I feel that children will like the book more because of that".

"I like that the book is simple yet informational which makes it suitable for young children since they learn alot about nature without struggling to understand certain words. I also like how the stories are not connected which means you can read the chapters out of order and still be able to enjoy it".

"This book is a great book to read with your kids and it’s suited for children inside infants school to read as a group. Children would learn about attitude and behaviour as well as we can learn about features that animals have that we don’t have. They can also expand their imagination".

"This isn’t the kind of book that I would read as it didn’t have enough humour in it, teenagers may not see the humour and therefore not enjoy it as much. I like how on almost every page there is an image to support the text itself".

"I found that this book is not my usual type, but I can appreciate the context within. Overall this is a fascinating read and would be satisfying for other readers".

"There should be a cliffhanger". 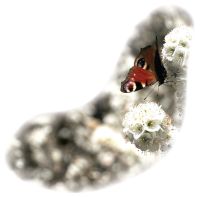 "I like that this tells you information about wildlife. Also it develops the characters alot and lets you get to know what they are like and their personality".

Age:
Virtually all of the reviews mentioned the age for which the book would work best as 7, many the range 5-7.

Images:
There is a mix of drawings and photographs in the book [not CGI as one thought]. Those who commented on this felt it was important to decide between which to use or choose the photographs as they were of the real animals.

Action:
Too safe, bland, plain, boring, needs more action, lacks plot. [Oh the temptation to comment on this! All I will say is that it is intentionally observational and therefore calm. The humour is subtle]

Length:
Too long for the age group, too many words on a page, too SHORT [I could kiss that one!]

Vocabulary:
Simple, suitable for a younger audience, simplistic, basic [since most adults think I use words that are too long am taking this as a huge positive!].

Rating:
Fifteen reviews gave a rating.
None were 5/5, but that is to be expected in the circumstances.
3 were 8/10 or 4/5
9 were 6/10 or 3/5
2 were 2/5 or 2.5/5
Several felt that the book wasn’t for them but that there was enough in it that they warmed to for that to be confusing, which could well be why a significant proportion did not give a rating. 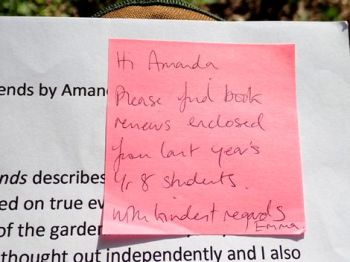 All the stages in this journey have had good people in them that need warm and appreciative thanks. Emma at New Nature who started the ball rolling. Emma Taylor Johnson, the teacher at Calderstones School who picked up the gauntlet with enthusiasm and gusto and of course the then Year 8 at Caldies who did such a splendid job in pulling their reviews together. Thank you again to Emma Taylor Johnson for sending through the reviews to enable this project to be completed. It has been a really worthwhile experience and I hope that maybe young Freckles will be singing gently in the minds of these kids for years to come as they look into theirs and other peoples’ gardens.

Link to Freckles and friends: true stories of garden wildlife