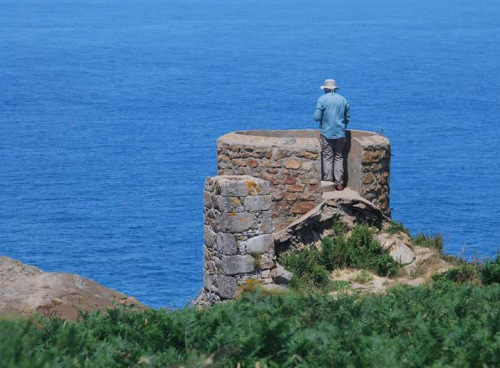 Many business owners are faced with a marketing conundrum. Ours is how to talk about our books and greeting cards in a way that people will actually find interesting!

Since 1995 and the rise of the internet alongside search engines like Altavista and then Google searching online for answers to this question is very tempting and can become a little obsessive. Sadly it always leads to the same outcome. There is a great deal of 'advice' but it is largely different people all saying the same things with little substance. There are some very helpful groups, but I remain perplexed.

In September 2015 I launched my grandfather's autobiography. It is told with depth and humour and details his life as a civil engineer and tunnelling ‘name’. It is called It's Warmer Down Below. As with all new authors and publishers I want to sing about this book from the rooftops. Since then three more books and a whole crop of greeting cards have been added to the list and they also stimulate this burning desire to yodel about them. The trouble is, so many people are yodelling it doesn't come across right. It comes across as a bit of a yawn. But it's also tricky, as people say things like 'Gosh I've not heard of this before, how fascinating!' once they have had a direct conversation about them.

The modern conundrum is how to say stuff in a way that gets through the treacle/jabber of information overload and that also gets through to the discerning target audience that is not obsessed with soap stars and drunken antics of reality stars.

If anyone reading this could answer the question (there should be a comments box below) about what they would look for from a page such as this, it would be an enormous help and could hopefully end up by making things a bit less ‘formal’.

Just ‘because’, there’s a bit on the books and greeting cards below, exploring the backstory of what they are about.

It’s Warmer Down Below: the autobiography of Sir Harold Harding 1900-1986

As is fairly obvious from the dates, the author (HJBH) finished his writing of the book over 30 years ago. He had been asked to write it by several publishers in the 1970’s and had put together what he expected to be a tale of an interesting life by the time of Margaret Thatcher’s premiership. Times were not good for publishing (Tim Waterstone was dreaming about his new store, it had yet to open and change book buying) and he was told, with regret, that there wasn’t enough sex in the book to make it worth going on with. After all the effort, this was a tough response and of course he lost momentum. At the same time a resurgence of interest in the Channel Tunnel began and he dedicated his efforts to lobbying politicians and journalists about the value of a twin bored tunnel instead of a rather surreal idea of a bridge. He and my father discussed his book and my father said that he would publish it ‘some day’, which was enough to save it from the bin.

After HJBH’s death in 1986, my father took the filing cabinet with the book, and some papers relevant to it, back home and began looking through the text. For reasons that I am not sure of, he made an intriguing decision to rewrite the book in the third person. This worked well for the first chapter when most of the information comes from written sources in any case, detailing forbears and childhood. It fell apart completely for any other chapters and the project ground to a halt, particularly when my father became ill himself. He and I then had the same conversation that he had had with his father about the future of the book and, in order to save it from the shredder (since times had moved on), I promised that ‘one day’ I would get it out into the world where it truly belonged.

I moved the files home after my father’s death ten years ago and after my grief would allow me to fulfil my promise. It took being rammed by a bus in 2013 to focus sufficient attention on the project to actually carry the promise through. Nothing like the risk of mortality to highlight things still not yet done. Initially the book was taken up by a very good publisher with the right sort of experience, but we came to a difference of opinion over a few crucial aspects of the book. I found another dream attractive enough to make the decision, backed up by family and friends as the right path for the book and published it under the new name of Tilia Publishing UK. In September 2015, the book was launched in the library of the Institution of Civil Engineers to a lovely group of interested people including members of the British Tunnelling Society, of which HJBH was founding chairman, and who had very kindly sponsored the publication.

The Lichens of Jersey

To date, all of the books on our list have had a long gestation period. The work for the Lichens of Jersey started many years ago with fieldwork for the Environment Department of the States of Jersey, undertaken by my husband Simon Davey with the late great Peter James. They spent several weeks a year scouring the island for significant sites and species. As their fieldwork developed, production of a flora was discussed. Peter then became unable to travel and Simon and I started to do the fieldwork together instead. I was photographing habitats and doing some small bits of research. The small bits of research grew as we discovered more about the significance of lichens in Jersey for the international community, given how many are recorded as type specimens. An intriguing character called Charles du Bois Larbalestier (a nineteenth-century lichenologist) grabbed all of our attention and the scope of the flora grew into the heavily illustrated book that was finally published in 2015. It is published by the Société Jersiaise, but designed and laid out by us. Copies of the book have sold across almost all continents, so far Asia and Antarctica have remained immune to its charms...

This book was written by Simon Davey in 1985 following an eye-opening trip to the Scilly Isles in 1984, where he experienced twitching and mad mayhem in the peak years of competitive bird watching. It is interesting to note that since then the good autumn birds have been found further to the north, pointing to changes of patterns of migration. Migrant birdwatchers are a rugged breed and the experience of the ‘journey’ (in X-Factor parlance) was extremely real. He wrote the book while sitting in a Hampshire pub while the memories were fresh.

A couple of forays into trying to find a publisher stumbled, this was before JK Rowling became such an inspiration for dedication to the attempt to be published. The manuscript remained in a drawer for the years that followed, until a chance conversation with a birdwatcher friend resulted in a list of publishers to approach now that books on twitching were known to be viable. The first publisher on the list (Brambleby Books) accepted the manuscript and following a few false starts with others, I picked up the mantle to do the illustrations that are throughout the book. Evoking the Scilly light was their aim.

This book is the current baby on the list, it was published in 2016, again by Brambleby Books. It is another entertaining book on natural history travel by Simon Davey and is this time about his years as a natural history tour leader and studies the bizarre behaviour of the lesser spotted human as well as all the various wildlife and machines encountered over these years. It is funny, difficult, painful and was also written in the same Hampshire pub. Well the first couple of chapters were written there, the rest were written in an old stable building that we used to live in. We fought hard to keep the title, as it is such a recurrent phrase on troubled trips where it means the exact opposite.

There are new books on the stocks....their gestation period is way shorter than these four and they will all be under the Tilia Publishing UK imprint.

Cards are personal reflections of emotion and relationships. The Greeting Card Association have a current search for a phrase that sums up what sending cards means to people. My submission has been ‘Making the thought count’, as not all cards are sent with warm cuddly loving thoughts, quite a few are courteous and of course many are funny and can even achieve offensiveness if the sender and recipient have the right relationship for that to work. Or if real offence is the true thought, of course! Our offerings are selected in the main to showcase our beautiful world and promote warm thinking between people.

We have a growing selection of cards. So far there are six ranges:

A new range shortly will be cards originally painted by my mother, Diana Harding, a talented wildlife artist who has kindly given me permission to have them printed again. Watch this space....